iOS 10, the latest version of the operating system, is now available for iPhone and iPad.
Its main innovations were introduced at the WWDC 2016 in June, but since then Apple has been working to add more features and editing others, based on reports from users who have installed the beta versions of iOS 10.
Here’s a small guide to know what will change and how it works on Apple devices.

Lock screen
Notifications are listed in a clearer way and divided into individual panels with lighter background, in order to make them easier to read. If you pick up the phone to activate it, iOS 10 automatically turns the screen on without having to press the Home button. Apple also changed the gestures for the lock screen: swipe your finger left to access the Camera, to the right to access widgets of the applications, and down to see the latest news in the Notification Center.

Control Center
Control Center can be accessed everywhere by swiping from bottom to top, that has been reorganized with larger keys, more showy colors, and controls for the phone are separated from those for music (this second panel is accessed by sliding to the left from the main control center screen). The most important change concerns app shortcuts, located at the bottom: they can be activated using 3D Touch for advanced options: the Torch has different degrees of intensity, the Timer has some preset time intervals to choose from, the Calculator allows to quickly copy the last result obtained, while the Camera has options to launch the app in different shooting modes.

Spotlight
From the Home screen, slide to the right to access Spotlight, the search feature. The view is similar to that of iOS 9, with the addition of widgets as in the Lock screen. This change was made following the removal of widgets from the Notification Center. The graphics have been redesigned, in order to make search results way more organized. 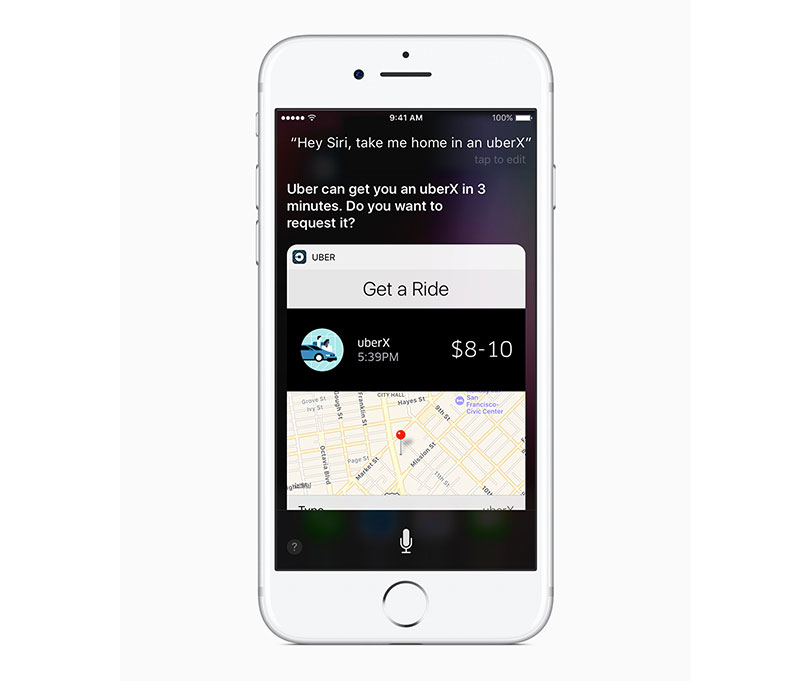 After years of being closed to other applications, Siri is now able to communicate with apps and use their data to offer more advanced features. For now, the option is limited to certain apps, such as messaging, payment, exercising and for location information. Siri’s integration will depend heavily on developers, which will decide whether to make it accessible to their applications. As for Apple, the company hopes to make its personal assistant more relevant and useful.

QuickType
Apple has worked hard on iOS 10’s keyboard to overcome some of its limitations. QuickType, the feature that suggests words above the keyboard, has received a major update. Now, it shows not only common words, but also other information obtained by the context of the messages. It may then suggest phone numbers, email contacts, location, emojis and so on. With iOS 10, QuickType understands the language used when writing, so users don’t have to switch keyboards. 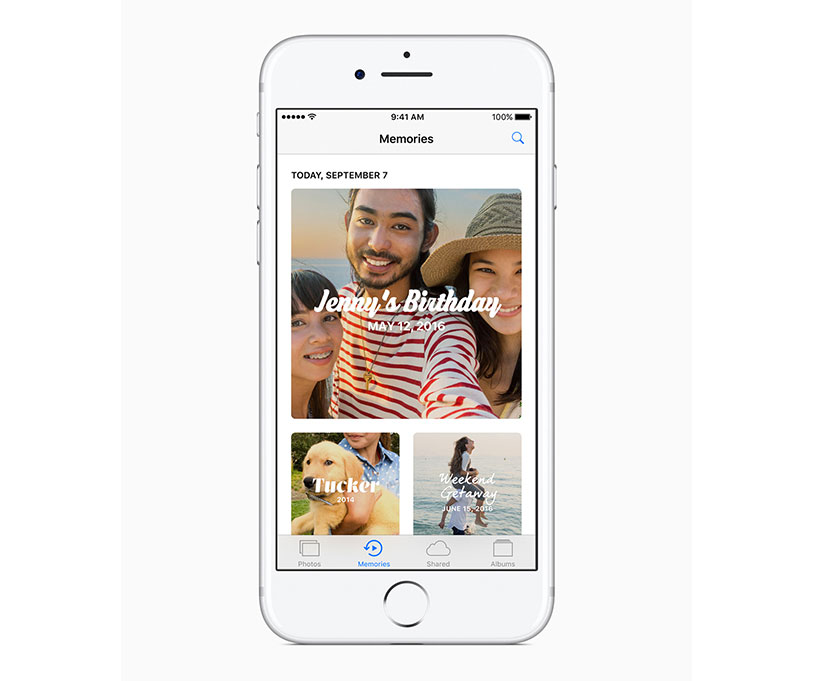 The new Photo app scans all the photos in your camera roll with artificial vision systems to catalog their content, from the presence of people to individual objects or landscapes. For privacy reasons, the scanning is done directly on the device and does not send data to Apple. After learning as much as possible on the photo library, the app creates a number of collections to the new section Memories, based on the date when the photos were taken and the people, places and other objects that appear.

Maps
After a long period of neglect, Maps with iOS 10 has received several significant updates. The pin that shows where you are has now a small indicator that is oriented in the direction of the phone. In the upper right corner, there are two buttons: one for retrieving information about the place where you currently are, the other for accessing various features of the application. At the bottom right, a small icon with a number shows the weather conditions at the location displayed on the map. Below, the app shows a number of suggestions about places to get direction, which are based on the user’s daily and weekly routine, or based on events marked on the Calendar app. Information on clubs, shops and other establishments are now visible directly within the application without having to open any other apps.

Music
The change in graphics is definitely one of the most significant innovations of iOS 10. Apple welcomed the numerous criticisms of users and has almost completely redesigned the graphics of the application to simplify it and make its main feature much more accessible. Each section has a big title with a card that lists all the songs of the library. One section has been made to discover new music more easily, one to get advices from the user’s musical tastes, and one that is based on previous listenings. Moreover, the option to read the lyrics of songs directly within the app has been added as well.

Phone
Apple has also added some features to its phone app, which include: a system to transcribe voice messages left in the voice mailbox, extensions to use a filter that blocks unwanted phone calls using a database of bad numbers (for example, those that come from telemarketing), a new system to show richer and clearer calls received through phone apps, such as Skype or Viber. 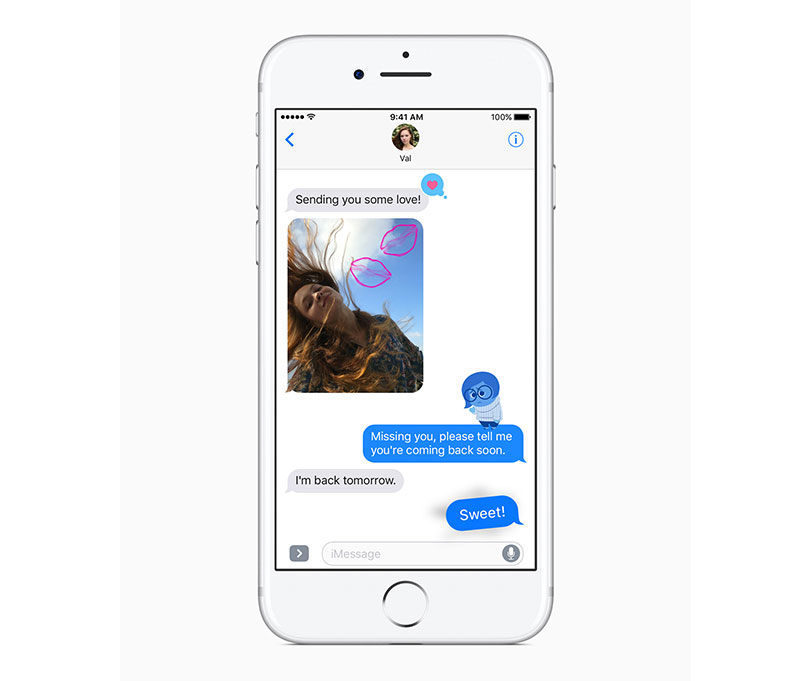 Apple has completely redesigned its Message application, integrating features similar to those offered by Facebook Messenger, WhatsApp and Snapchat.
Links in Message are shown with a preview of the content, and those from YouTube gets transformed into videos directly in the app.
The text field box is not immediately expanded across the entire width of the screen; beside the buttons to add a photo and to record a voice message, Messages has two new buttons: a heart-shaped icon and the AppStore’s icon.
The new heart-shaped button replaces the keyboard with a space where you can write or draw freehand, to create more personalized messages. Tapping on the space with two fingers sends a heartbeat, similar to the feature available on Apple Watch. Swiping up further expands the space to draw, and you can add photos or record videos, to share with the person with whom you are chatting. The other button opens new applications that run within iMessage; this feature is still under development and over time it will be enriched. These little apps allow you to send many types of stickers, add animated GIF or send money to your friends.
Messages has other new features as well: if you hold your finger on a received message, 6 icons appear with as many reactions to choose from (a heart, thumbs up or down, an ”ha ha", a double exclamation point and a question mark); bigger emojis when you send messages without words; suggestions to replace words with emojis; changing font size in the message; add effects when you open a new message; using Invisible Ink to cover texts and images that become clear only after the recipients swipe their finger across the message.

Sounds and Animations
Apple changed the sound produced by the keyboard when typing something: it is "softer” and less mechanical. The transitions between an app and another, or when closing one to get back to the main screen, have been redesigned to be faster and less invasive, ultimately to give the idea of having an even more responsive operating system.

Removing Apple apps
Up until iOS 9, it was impossible to delete Apple default applications from iPhone or iPad (Mail, Calendar, Compass, Calculator, Notes and Weather). With iOS 10, these apps can be removed like any other application. However, Apple stated that their apps stay on the operating system, they are just hidden.

Download and Compatibility
The new iOS 10 can be installed directly in the iPhone and iPad, or by connecting the device to your computer using iTunes. In the first case, simply open the Settings app, select General and then Software Update. In the second case, just connect the device to your computer, open iTunes, and follow the instructions that appear on the screen. Before updating make a full backup of your iPhone or iPad.